Hobby Haven in Des Moines, Iowa was the host of the 15th annual Shootout race. JConcepts was once again the title sponsor for this event. Dave Duncan made the trip from Florida to represent JConcepts and assist the team attending the race. Dustin Evans, Chad Due, Sarah Ernst, Neil Feneis, David Fast and Corey Liebherr were just a few of the team drivers that made the trip to race this event. Dustin Evans was running 2wd mod SC with his TLR 22SCT, 2wd mod buggy with his TLR 22.2 and 4wd mod buggy with his TLR 22-4. Corey Liebherr was running 2wd stock buggy with his Team Associated B5. Neil Feneis was running 2wd mod stadium truck with his Team Associated T4.2 . Dave Duncan was running 2wd stock stadium truck with his Team Associated T4.2 . Practice was scheduled to be most of the day Friday but with the bad weather the area was having the track wasn’t going to be ready. The track crew worked most of the day putting lime on the track to help dry it out. With almost a full day of track work, Mother Nature did not let up and the organizers were forced to close it down for the day. On Saturday morning the track crew started early again putting the track together. They worked for hours so we could have a great event. The track opened around 10:30am to get a few hours of open practice before the first round of qualifying was to begin. Round 1 started at 1:30pm, with the track having so much lime on it, the team drivers had to scramble to try and decide what tires would work for each of us. With the bad weather, we ended up running 2 full rounds of qualifiers on Saturday. Sunday morning we started early with the 3rd final round of qualifying and then into the mains. After the 3 rounds of qual points qualifying, JConcepts had team drivers sitting TQ in 6 classes. With the time being so close with the bad weather coming back in Sunday afternoon we had to seat the top 10 in each class with no bump ups and we ran all the A mains first. Thanks to Hobby Haven, the awesome group of guys that worked on the track and Trevor “Chilly” Duncan for an awesome well ran program. We will see you at the next one! For more photos and videos from the event visit the JConcepts Facebook page. 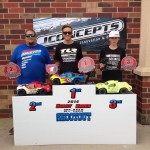 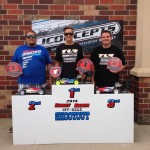 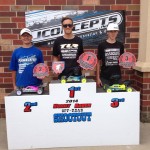 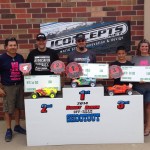