Held at McCullough’s Off Road Racing in Sarver PA. the RAC as it is commonly referred to is a charity race raising money for the American Cancer Society. With 260+ entries, this year’s race raised $23,000 pushing the 13 year total donations over $111,000!

Team Associated/JConcepts drivers Brandon Marsh and Nathan Clark were in attendance with Marsh looking to continue his winning ways at this race, and young gun Clark looking to make some noise on his first visit to McCullough’s.

The track layout was fast and fun with a challenging 6 pack that would keep the drivers on their toes all weekend. There was rain during and after the Thursday practice session, but the final practice session Friday morning and the first round of qualifying Friday afternoon were free of rain. With the track being wetter than normal the guys found green Pressure Points to be the hot rear tire for 2wd and 4wd buggy with green Bar Codes up front. For Stadium Truck Clark chose green Pressure Points all the way around.

The first round of qualifying would see Marsh set TQ in 4wd Buggy with Clark holding the #2 spot. In the hotly contested Mod 2wd Buggy class, Marsh again set fast time with local fast guy Luke McCullough a close 2nd and Clark sitting in the #5 spot. In Mod Stadium Truck Clark experienced a fluke part failure during warm up and didn’t register a time, Ohioan Zach Carey set the first round TQ.

Saturday morning saw a couple rain showers roll through about the time that round #2 of qualifying was scheduled to start. About 90 minutes after the rain stopped the track was ready for racing, but round #2 would see little change in the qualifying order as the track was just a bit slower than the previous day, although Clark did manage to set a new TQ time in Mod Stadium Truck.

Eventually the sun came out and the track started to dry out and groove up. A switch to green Bar Codes in the rear was in order. The 3rd round saw speeds increase across the board with most drivers turning in their fastest qualifiers in the final round. In the end Marsh took TQ in 4wd Buggy with Clark in the #3 spot. In 2wd Mod Buggy McCullough managed to snag TQ with Marsh a close second and Clark a few seconds back in the #3 spot. Clark held on to TQ in Mod Stadium Truck resetting fast time.

Sunday morning started with the lower mains and as time passed the track continued to dry out and groove up. With the track grooving up nicely the A mains promised to be action packed. In the 2wd Mod Buggy main Marsh and McCullough battled wheel to wheel almost the entire race with Marsh taking the lead late in the race to bring home the win, McCullough finished 2nd and Clark in 3rd. In Mod Stadium Truck Clark battled early with Ohioan Zac Cooper, but over the 10 minute race Clark was able to run clean and fast eventually finishing 2 laps up on the field. In 4wd Buggy Clark took advantage of a first lap bobble and raced out to the lead. Clark was out front laying down fast consistent laps as Marsh was chasing hard in 2nd. A tangle with a lapped car erased Clark’s lead and allowed Marsh to put on the pass, but Clark wasn’t giving up and he came right back and put the pass on Marsh. The two drivers swapped the lead several times over the next couple laps until Clark landed a jump off line and caught an open tube with his front wheel breaking a spindle and ending his race. Marsh cruised in with the win a full lap up on the field.

Overall an extremely fun and successful weekend. Hats off to the McCullough’s crew for running a great race. 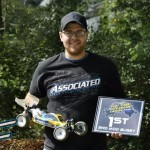 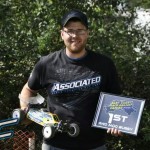 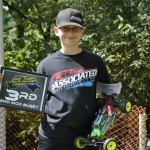 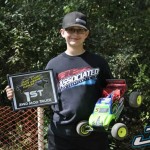