On September 2, I ventured to Chester, NY for the 2018 R/C Monster Truck Challenge World Finals. This was their 10th year for the event and having won last year’s race, it was going to be a tough task to replicate that performance with more people and more trucks in the competition this year. 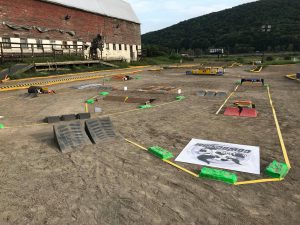 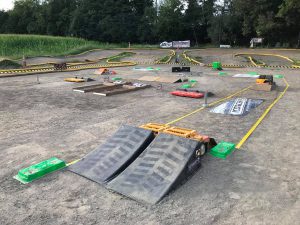 The track was a fast outdoor layout, with high speed straightaways, a tight u-turn and a crossover jump at the other end that ensured you ran on both sides of the track before the finish line. The qualifying structure of the event works as a mini points series, where you run through groups of randomly-drawn brackets and you earn points based on a win, loss or DQ.  I struggled a little in qualifying, as I wasn’t accustomed to the high speeds and never made it past the round of 16 with any of my 4 Pro Mod trucks. New England racer Pete Paquette knocked 3 of my trucks out in those rounds in close finishes, one of which had to go to video replay. It appeared that Pete had my number for the day so far. Overall though, I was able to put my trucks on opposite sides of the bracket for the final 64-truck showdown, which was my main goal.

Next up was the mega truck competition, which was run in its entirety in between Pro-Mod qualifying and racing.  My first time running the class was a blast, and the Fling King tires were much more stable than I had expected. I was able to take the TQ spot with my Tweaked Remix Clod Buster. After running through the bracket, I was able to take both spots in the finals with Tweaked Remix and my JConcepts-themed Axial SMT10. For the finals, I handed the radio for the JConcepts truck to my hired-hand crew chief Morris and the Tweaked Remix truck came out on top in the final showdown. I can’t wait to run the Mega  Truck class at my next event! 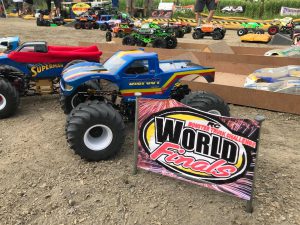 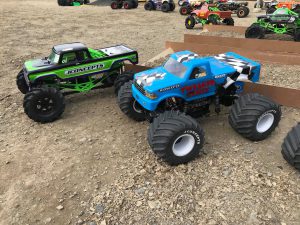 After the Last Chance Shootout bracket to get the final transfer position, it was time for the big show – the 64-truck main racing elimination. The earlier runs in the day had allowed me to work on my rhythm a little, and I was able to start putting in fast repeatable runs.  With elimination racing, survival is the main goal and I was able to catch a few lucky breaks where my opponent made a mistake which allowed me to dial back to 95% and finish my runs clean to take the win. In the round of 32, I faced myself which meant choosing a truck to move on, and that put 3 of my trucks into the final 16. I had to eliminate myself again in that round, but I still had a truck on both sides of the bracket going into the final 8. Now the racing was extremely tight and a fast run was critical. I finally got a win against Pete and fellow JConcepts team member Ethan Saunders in the semi-final runs which put my two trucks against each other in the finals. Overall it was my Bigfoot 19 Clod Buster with the Team Juice Cube^3 chassis that would take the first place spot and my Superman Team Juice Cube^2 Clod Buster in second. I couldn’t be happier with the performance of the trucks when it matters the most, and it was a great feeling to go through the entire competition bracket without losing a round to a competitor. The JConcepts Renegades in blue compound were definitely a key to the trucks’ handling, as I had consistent traction throughout the day when the track developed more of a groove as the rounds progressed. 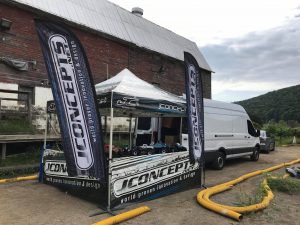 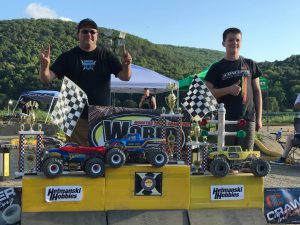 Special thanks to JConcepts for all the help and support, Live Fast R/C Paint Works for keeping my trucks looking good with fresh paint, and Reedy Power for the great electronics and batteries that powered my vehicles. Also a big thanks to Dan and Kyle DeFalco for putting on a great event, and to Morris for being my pit man and relief driver on the long drive home.