I have to give a shoutout to Jon Faulkner who stayed up till 2am mounting tires last night.  I fell out around 12:30 or 1:00.  Jon is going to need extra caffiene today so we started him with a an extra boost of coffee from McDonalds.  Jon likes Starbucks but I don’t see one.

Last night we mounted a few fresh set of Crosshairs in yellow for truck and some sevens in yellow for buggy.  This was going to be first out for Maifield in the morning / afternoon.

I’ve been bumping around the pits quite a bit and a lot of the Florida guys are doing well.  Sean Kersten, Luis Perez, Nick Angelidas and Mike Mellena are all up and running and look to be getting around well.  Looks like Luis likes the Double Cross and the other guys are bouncing between Sevens and Crowbars.

Later in the day a lot of drivers were asking me for Bar Codes and Sevens so that seems like the current hot setup.

It’s pretty busy here early AM at around 8:00.  Guys are experimenting or over-thinking just about everything.  There is a small open practice session before the heats start and the driver stand looks packed.

Next heat included Maifield and Truhe and they were very near each other on the track.  They looked pretty well
matched in speed but Maifield got caught in traffic and slowed down his practice run.  Maifield had hot lap of the heat.  Ryan ran that heat on his used yellow Cross Hairs and they looked like a good choice.

The heats are arranged in 14 or 15 car heats for practice.  The track really isn’t big enough for that many cars so it’s going to be interesting.  Hopefully they have a re-sort at least because we are looking at some drivers being 5-7 seconds per lap off an A-main driver.  Things will get interesting.

Buggy was up next and right from the start they didn’t look as quick as the trucks.  I don’t see why buggies should be slower so this must be
temporary.

I needed to make a run to the hotel to pick up a few things for the drivers and pick up some lunch.  Maifield has one more truck and buggy run so we have a few more things to work on and we were still looking for that confidence run. 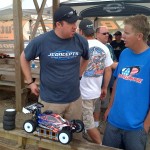 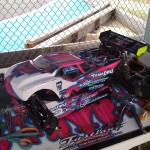 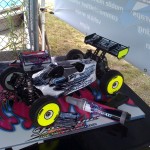 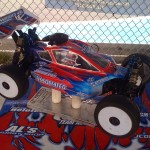 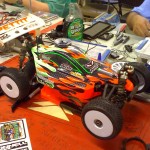 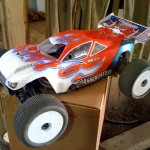 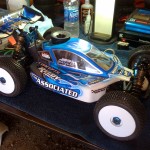 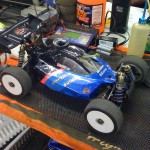