Traxxas has added another flavor to the Titan 550-powered Slash lineup, this time it’s the GUNK colors of Indy racer Arie Luyendyk Jr. All the usual Slash features are in place, see official Traxxas hype below. 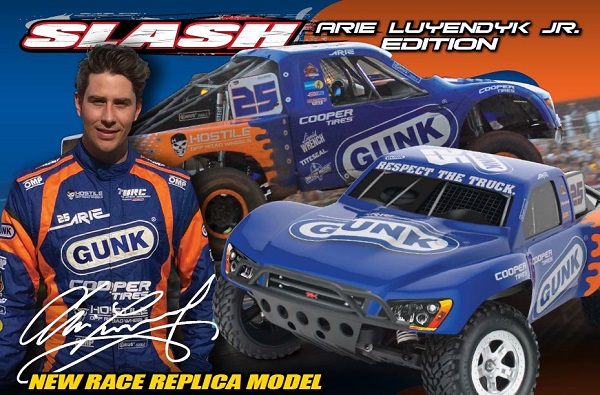 Former Indy driver, now off-road racer, Arie Luyendyk Jr., has made a name for himself in the short course racing community. His GUNK-sponsored truck features a very recognizable blue, orange, and white paint scheme that sets it apart from the crowd.

Now, you can bring that same splash of color home to your backyard or favorite track. Stand out from the crowd with the Arie Luyendyk Jr. Edition Slash 2WD Short Course Truck.

The Traxxas Slash brings all the action home so you can experience the highspeed head-to-head competition at the track or in your own backyard. The Traxxas Slash hangs it out for an all new way to challenge your driving skills. The 4-wheel independent suspension has been carefully tuned to replicate the Pro 2 driving and handling experience as closely as possible. The scale appearing tires provide just the right amount of bite and thick, blinding clouds of dirt roost.