JConcepts has announced that they have signed TLR pilot Dustin Evans for the upcoming 2012 race season. Check out the press release below for more: 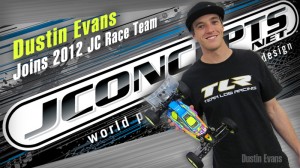